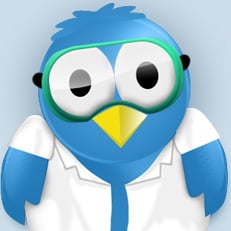 However, not everyone is great at meeting new people. I am quite shy. When people question this trait of mine I tell them about my first day in 6th grade at a new school. Instead of talking to other kids and starting to make new friends, I found the only desk with no one around it, put my head down and cried.

Fast forward, almost 25 years, I am still terrible at making new friends. I’ve learned some strategies and coping mechanisms to overcome this in the workplace. However, at big meetings, the perfect opportunity to connect with a lot of people, I turn right back into that shy little girl from a quarter century ago.

Much like in a bar, that first sentence, that “pick up line”, can be so incredibly awkward.

I’ve found I need an “in”, a reason for approaching a person, other than for the sake of meeting them. At large conferences, this can often be achieved after seeing someone’s presentation.

“Hey! Great talk! I was interested in that slide where…”

But that doesn’t work all the time, and can sometimes still seem awkward. Here is the best pick-up line I’ve heard:

Here’s my personal story of how easy this is.

I recently attended the American Society for Virology annual meeting at Penn State. Approximately 1000 grad-student, post docs, and PIs attend this meeting each year. Many attendees have been going every year for decades. I had attended twice before, the sole representative from my lab, and didn’t have much success meeting people. Returning this year as a post doc in a new lab and field, I was determined to improve on my skills.

I had also recently signed up for twitter and was building my base of relevant researchers to follow. The science twitterverse is a bit smaller than others. Medical professionals have 100x as many twitterers. Check out #FOAMEd to see how powerful twitter can be: case reports, medical pearls, etc. It is more difficult sharing cutting edge science since we are all competing for the same money, but there is still much to be shared and gained from your fellow virologists, especially when it comes to networking.

As I walked through the first social event at ASV this year, I recognized one face after another, people that I followed on twitter. My nerves getting the best of me, I hesitated and gave up an opportunity to meet someone I practically new already. Finally, I gathered up my nerves and walked right up to a “big fish”, 5000+ followers, blogger, podcaster, and PI. It wasn’t awkward or weird. It was very natural. I started with, “I follow you on twitter and really enjoy the blogs and podcast”, and the conversation continued from there.

After that, it was really easy to approach people, especially when I already knew them from their twitter feed. The best experience was when someone approached me and said, “I’ve been dying to meet you, I’ve been following you on twitter!” Me?? I couldn’t believe it! But it proved the point that using social media can enhance your networking skills.

What I’ve said in the past